BRETT Diston of Ray White Nunawading in Victoria has taken home the top industry award for Commercial Salesperson of the Year award for 2019 at the REIA national awards held last night. Some 250 people attended the Real Estate Institute of Australia (REIA) national awards last night at Crown Perth last night. REIA President Adrian Kelly said the awards acknowledge and recognise the best of the best in Australian real estate.  “More than 250 real estate professionals from across Australia converged on Perth last night indicating just how strong our industry is,” Mr Kelly said.  “Winners were recognised from most of the states and territories highlighting it is not just the larger states and metropolitan cities taking home the awards but there where outstanding achievers from everywhere.” 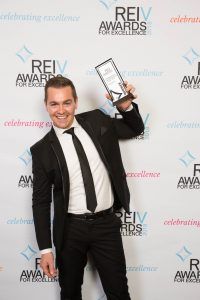 Mr Diston said he was thrilled to have won the national award, after winning the state award (pictured here)  last year.  “This is a career highlight for me to be recognised and awarded Australia’s best commercial sales person in a challenging market,” Mr Diston said. “It was a privilege to be awarded Victoria’s top commercial salesperson in 2018 but an absolute honour to receive 2019 Australia’s commercial sales person.”  The national award recognised excellence in agency practice and covered the commercial sector, including small, medium and large agencies. This award was not judged on sales figures.  They recognise and reward agents who have gone the extra mile in pursuit of service, ethics and results.

Back to all news
Up to Date